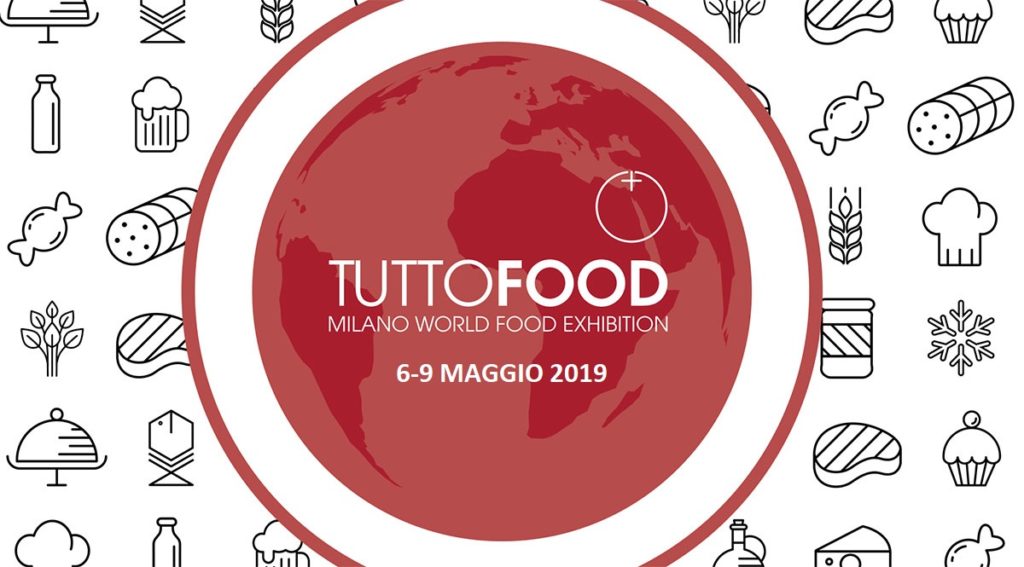 TUTTOFOOD is the international B2B show dedicated to food & beverage and organised by Fiera Milano from 6th to 9th may 2019. In just 6 editions, it has become an international hub for the agri-food and quality food system, capable of creating synergies and shortening the distances between the countries of the world. A perfect showcase for presenting one’s products to the national and international markets.

Santagata takes part in TUTTOFOOD with its products – Santagata and Frantoio di Portofino – in network with other high quality Ligurian food producers that are part of “GASTRONOMICA”: together with Santagata extra-virgin olive oils, the genoese Pesto produced by “Rossi 1947” Pock Eat”, “Terre Taggische” and “La Ronchese”.

In recent years, Santagata has consolidated its presence in international markets where great attention is paid to healthy eating and an increasing interest in typical products of Italian gastronomic culture, such as extra virgin olive oil, is registered. Participation in TUTTOFOOD is part of this strategic development and internationalization process.

Santagata confirms its participation in the second edition of “Un Mare d’Olio” which will be held on Saturday 14 and Sunday 15 September in Santa Margherita Ligure and Portofino. The event is  dedicated to the best Italian extra virgin olive oils and to the excellence of our territory, among which the products Santagata and Frantoio di Portofino are affirmed.

The event finds its natural home in Santa Margherita Ligure and Portofino, nestling between the enchanting blue of the Tigullio sea and the green of Portofino mountain park. Two days to taste and buy extra virgin olive oils, talk to the producers, listen to their stories, understand the passion that drives their daily work, understand the value that olive oil has on the daily table.

On the promenade of Santa Margherita it will be possible to find the best of Italian production with excellences from all over Italy. The event aims to support the spread of culture and knowledge of olive oil and to enhance the activity of producers who dedicate all their efforts to improving olive groves and the oil they produce. 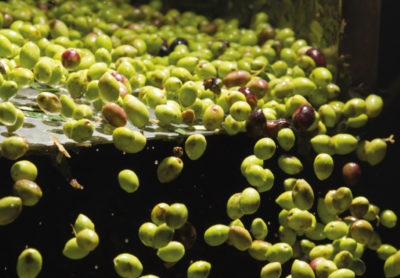 The Olive oil: today we talk about Blend

As blend we mean a combination of extra virgin olive oils, each with a clear identity. Their mixing is carried out to obtain a balanced and harmonious product that is specifically created to be unique, peculiar and to be appreciated by the customer. Blends are created for various reasons: to satisfy specific trends in taste (we then have a variety of flavours such as“sweet”, smooth, full-bodied or delicate); in relation to a future consumption trend (for example an oil with stronger flavour and aroma or an oil with both a persistent and clear bitter and spicy flavours); to adapt the oil to the specific culinary needs.

The Blend is one of the most complex and sensitive issues of the oil production sector; to explore other themes and specific terms please visit our Glossary page of Santagata 1907. 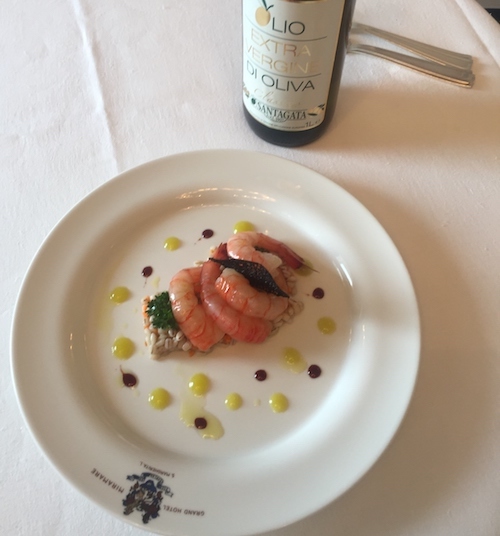 Head Chef at Ristorante Vistamare, Claudio Fortuna, whose family has its roots in Abruzzo – was born in Paglieta, in the province of Chieti – and graduated from the Villa Santa Maria hotel and catering college. Ten years ago, following several seasons working in the most prestigious Ligurian hotels, and other regions, he was attracted to the Gran Hotel Miramare in Santa Margherita, first as a shift manager and, for the last three years, as the Head Chef of the Vistamare.

Previously, Fortuna boasted of prestigious collaborations with the Hotel Splendido in Portofino, the Cipriani in Venice, the Imperial Palace Hotel in Santa Margherita and the Excelsior Palace in Rapallo.

These recipes are taken from chapter 6 of the book “An Olive Oil Family” written by Cristina e Federico Santagata on the occasion of the 110 years of their company and pubblished by Olio Officina Edizioni. 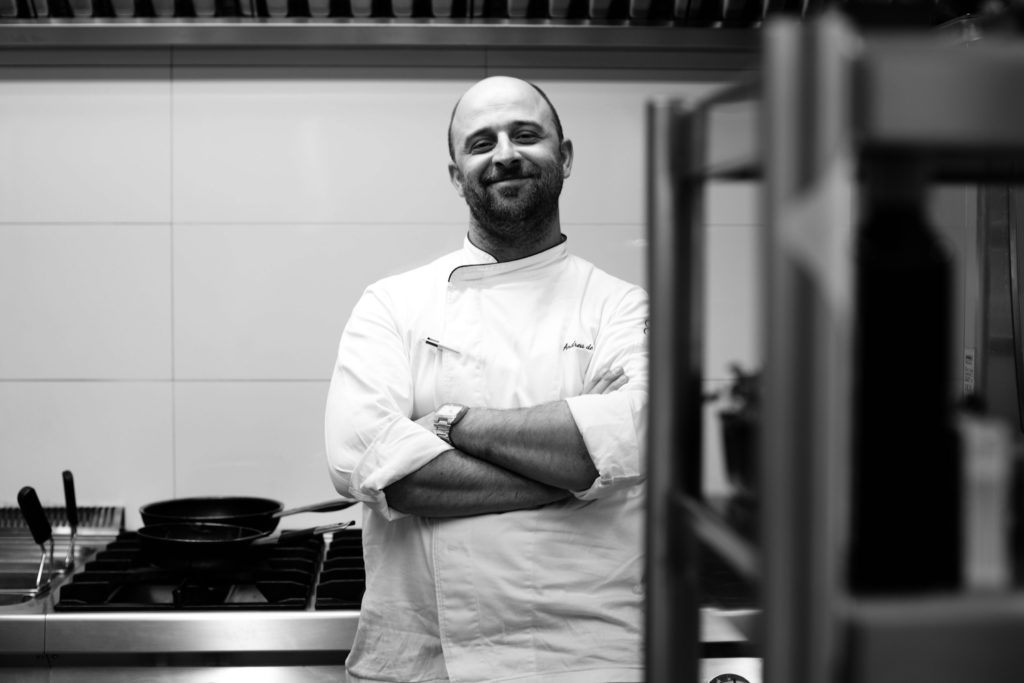 Raw Squid with Orange and Fennel 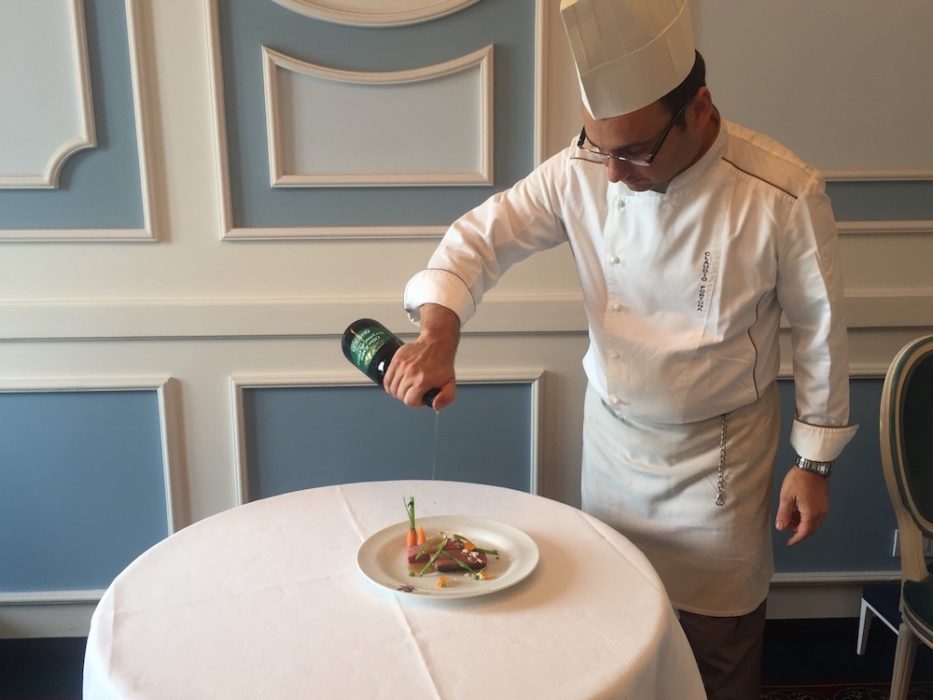 Remove the fat and the nerves from the fillet, season with balanced salt for red meat and wrap in cling film. Let the meat rest in the fridge for approx three hours. Slice into portions of 170/180 g each, place in the pouches and cook using the sous-vide method for 50 minutes at 55° in the water oven. Plunge into water and ice and keep at 3°. Regenerate in the water oven for approx. 10 minutes, open the pouch and dry well. Brown the meat in a pan with a small amount of extra virgin olive oil and then cut. Serve with mangetout, white turnip and baby carrots together with the veal sauce. Dress with Santagata ‘Neve’ extra virgin olive oil.

Head Chef at Ristorante Vistamare, Claudio Fortuna, whose family has its roots in Abruzzo – was born in Paglieta, in the province of Chieti – and graduated from the Villa Santa Maria hotel and catering college. Ten years ago, following several seasons working in the most prestigious Ligurian hotels, and other regions, he was attracted to the Gran Hotel Miramare in Santa Margherita, first as a shift manager and, for the last three years, as the Head Chef of the Vistamare.
Previously, Fortuna boasted of prestigious collaborations with the Hotel Splendido in Portofino, the Cipriani in Venice, the Imperial Palace Hotel in Santa Margherita and the Excelsior Palace in Rapallo.

These recipes are taken from chapter 6 of the book “An Olive Oil Family” written by Cristina e Federico Santagata on the occasion of the 110 years of their company and pubblished by Olio Officina Edizioni. 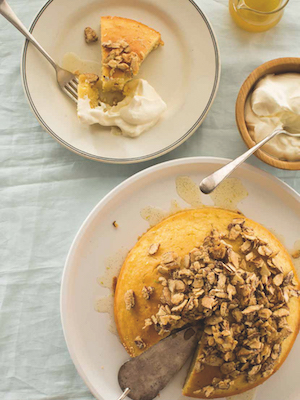 Italians often eat cake with extra virgin olive oil cake for breakfast, but without the lemon and honey syrup I have added here.
If you prefer a less moist cake, reduce the amount of syrup by half. The candied almonds can be produced in large quantities and are perfect when added to many other recipes.

For the candied almonds

For the lemon and honey syrup

For the candied almonds, heat the oven to 160°C, place the sliced almonds on a baking tray and let them toast in the oven (3-5 minutes).
Pour the sugar and water into a pan with a thick base, bring to the boil and leave to boil. Do not stir but gently move the pan so the mixture moves around and cooks evenly. Continue like this until the mixture becomes a light blonde colour. Take the pan off the heat and add the toasted almonds, mixing well until the sugar mixture begins to crystallize.  Poor onto a baking tray, let it cool and then store in an airtight container.
For the cake, heat the oven to 180° C. Put the sugar, the Santagata extra virgin olive oil and the lemon zest in a mixer, start the mixer and add the eggs one at a time allowing the mixture to combine well between one egg and the next. Add the limoncello, the chopped almonds, the flour and the baking powder. Mix well.
For the lemon and honey syrup, combine all the ingredients in a small pan, warm until the honey (or maple syrup) melts into the other ingredients but do not let it boil. Set to one side.
Butter a 20 cm cake tin and line with greaseproof paper. Pour the mixture into the cake tin and bake in the oven for 35 minutes or until the cake is golden and cooked through. Remove the cake form the tin while it is still warm, use a skewer to make some small holes and pour the syrup over the cake. Sprinkle with the candied almonds. Slice and serve with whipped cream.

Simon Gault is one of the most renowned stars of the New Zea-land culinary scene. He has worked in New Zealand and internationally in a large number of establishments, including the starred ‘Leiths’ restaurant in London, and the prestigious ‘Thornbury Castle’.
Simon Gault is the former executive chef and co-owner of the Nourish Group, a collection of award-winning restaurants in New Zealand, and is the owner of Sous Chef, an online business which imports, distributes, and sells the best ingredients produced by artisans around the world.
Famous for his appearance in five editions of ‘MasterChef New Zealand’, as well as being the star of the television series, ‘Chef on a Mission’, he is the author of four successful cookery books including ‘Modern Classics’ by Simon Gault. He is also proud of his role as ambassador for the well-known brands, Audi and SMEG.

These recipes are taken from chapter 5 of the book “An Olive Oil Family” written by Cristina e Federico Santagata on the occasion of the 110 years of their company and pubblished by Olio Officina Edizioni. 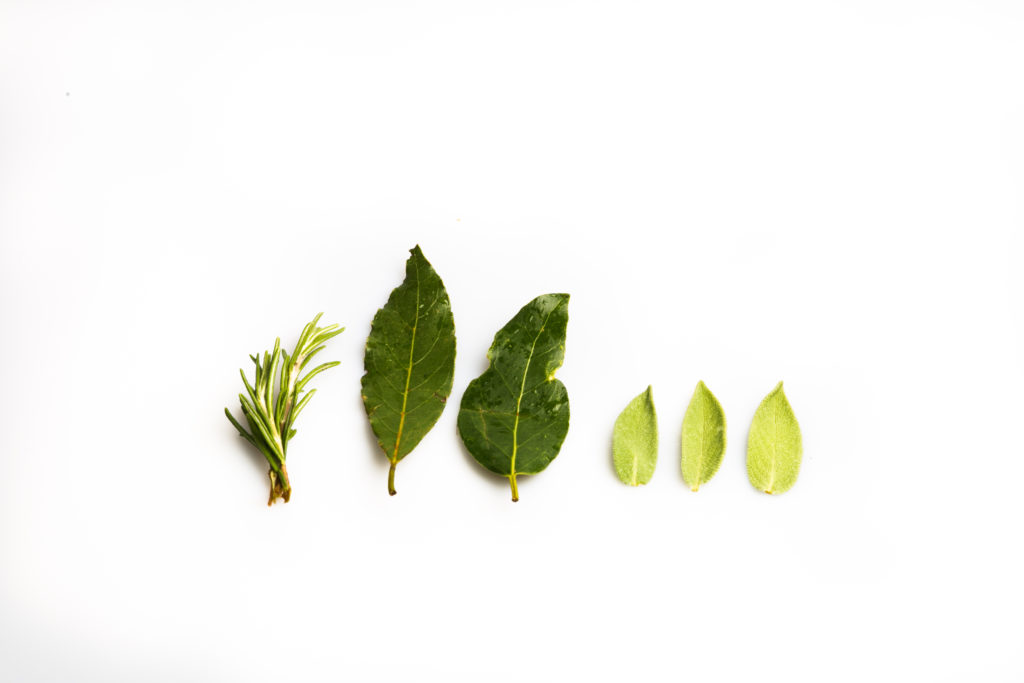 Combine the Santagata extra virgin olive oil, the walnuts, the Swiss chard, the salt and a pinch of sugar.
Use a blender to mix well until it is a creamy consistency.
Finally, add Parmesan.

Mince the beef and finely chop the shallots and the chives. Emulsify the lemon juice with the Santagata extra virgin olive oil, salt and pepper. Add all the ingredients to a bowl, combine and dress with the emulsified mixture.
Prepare portions of the tartare on the plates using a food ring.
Combine the two types of mustard, the egg yolks, the lemon juice, vinegar, salt and pepper and prepare a mayonnaise by adding the oil one drop at a time ensuring it combines well. Season to taste.
Place the mayonnaise on top of the tartare and serve with salad.

Morwald Restaurant – Wagram, One Michelin star
Toni Mörwald, born in 1967 to farmers and winemakers Anton and Erika Mörwald, grew up in sunny Feuersbrunn am Wagram, immersed in nature and the production of wine, food and gastronomy. It was here that he also learned about the cycles of his region and its landscapes.
Toni Mörwald was named ‘Chef of the Year’ in 2004, joining the ‘Grand Chefs of the Relais & Châteaux’ in 2006, and was named ‘Euro Toques Master Chef’ in 2008. Today, he is one of the most famous and award-winning chefs in Austria and teaches cuisine and gives culinary advice on Austrian radio and television channels. Over the years, the Mörwald Group has participated in interesting hotel and catering projects, continuing to open its own restaurants.

These recipes are taken from chapter 5 of the book “An Olive Oil Family” written by Cristina e Federico Santagata on the occasion of the 110 years of their company and pubblished by Olio Officina Edizioni. 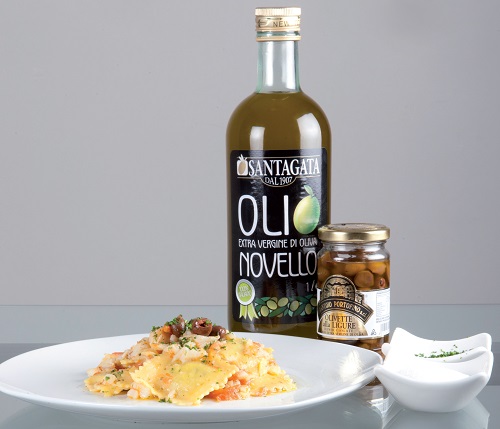 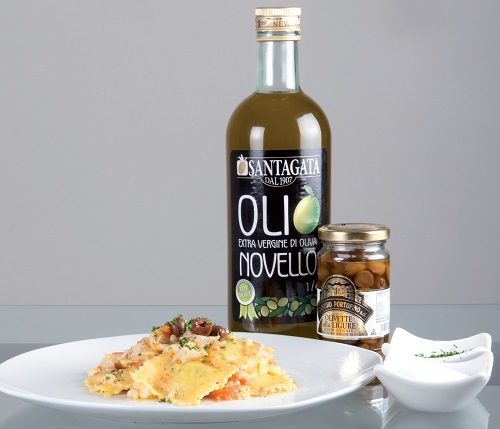 Boil and mash the potatoes. Prepare the dough mixing the two types of flour on a board. Make a well in the middle for the eggs. Knead until the dough is homogenous and elastic. Cover with a dump cloth and let it rest for about half an hour. Add the butter, eggs, parmesan, salt, pepper and nutmeg to the potatoes and knead until the mixture is smooth. Cut the rolled-out pasta into rather long rectangles. Spoon the filling at a regular distance on the rectangles and close it with a second layer of pasta. Cut the ravioli with a pastry wheel, seal and crimp the edges with a fork.

Prepare the sauce frying on a low heat the peeled and seeded tomatoes, the codfish and the rest of the ingredients. Drop the ravioli in boiling water, drain and add to the sauce quickly stirring and drizzling with Santagata extra virgin olive oil. 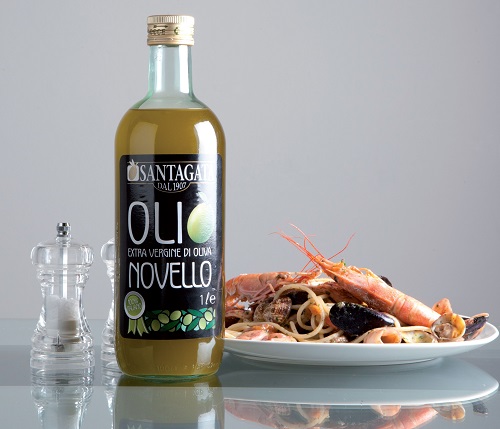 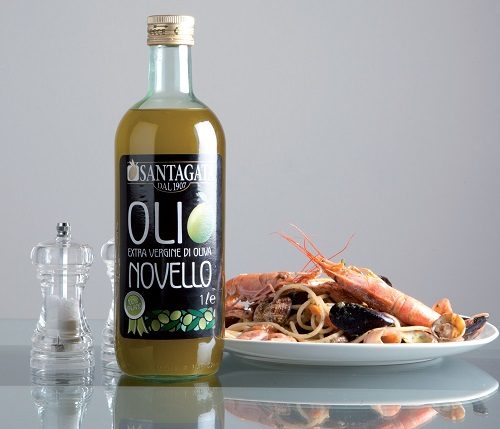 In a pan, lightly brown the garlic with extra virgin olive oil, stir in the diced tomatoes, add the seafood and cook for 10 minutes. Boil the pasta in salted water, drain it al dente and add it to the previously made sauce.